Source: If the Moon Were Only 1 Pixel – A tediously accurate map of the solar system

the key context missing here is that in the United States, we have almost never built new market-rate housing for low-income households. … As new housing ages, it depreciates, and prices and rents decline, relative to newer houses.

What really matters is not whether new housing is created at a price point that low- and moderate-income households can afford, but rather, whether the overall housing supply increases enough that the existing housing stock can “filter down” to low and moderate income households. As we’ve written, that process depends on wealthier people moving into newer, more desirable homes. Where the construction of those homes is highly constrained, those wealthier households end up bidding up the price of older housing—preventing it from filtering down to lower income households and providing for more affordability.

Exactly the same thing could be said of new car purchases: Most new cars aren’t affordable to the typical household either … So most households deal with car affordability pretty much like they deal with housing affordability: by buying used.

there’s no outcry about America’s “affordable car crisis.” The reason: high-income households buy newer cars; most of the rest of us buy used cars—which are more affordable after they’ve depreciated for a while.

For some of those immersed in virtual worlds, everything loses its meaning – even racism and fascism.

Several people have explained to me that it was all just fun; he didn’t mean it. Which, to my mind, is exactly the problem. When the Holocaust, nazism and racism are so abstracted from reality that they become just another expression of ironic detachment, when moral norms collapse into knowing laughter, our defences against offline horrors disintegrate.

Research shows that physical activity leads to better moods. The Nordics could be proof of that on a national scale. 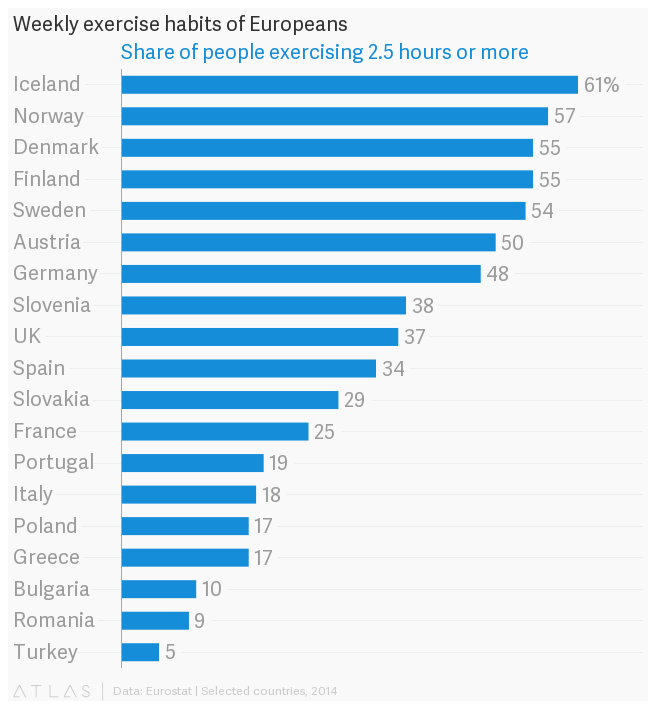 Source: People in Nordic countries exercise more than anyone in Europe — Quartz

Another way of thinking about progress, sometimes stressed by Silicon Valley venture capitalist Peter Thiel, is to ask whether the era of grand projects is mostly over.

If we look at the last 25 years or so, what do we have to count as grand projects?