Source: Speed matters: Why working quickly is more important than it seems, by James Somers

The obvious benefit to working quickly is that you’ll finish more stuff per unit time. But there’s more to it than that. If you work quickly, the cost of doing something new will seem lower in your mind. So you’ll be inclined to do more.
…
The general rule seems to be: systems which eat items quickly are fed more items. Slow systems starve.

Source: On Inequality and Risk Capacity | The Information, by Sam Lessin

The biggest factor causing inequality is the ability of people to take risk. Those who have already scored a big success have more capacity to take further risks than those who haven’t. … coupled with a changing landscape of the types of risk available to people and their capacity and willingness to take risk.

While I am sure [technology and unequal access to “opportunity”] play a role, I am convinced that they are not the major source of growing inequality in the U.S. The real cause is the compounding advantage that some people have in their ability to take certain types of financial risk in a world where access to capital is commoditized. Real returns come from high-variance, low-probability outcomes.

A smarter, stronger and harder-working person might do better than their neighbor, but at most by a few multiples, not orders of magnitude. Differences in knowledge might at first blush seem like they can provide compounding advantage … But the reality is that knowledge tends to diffuse quite rapidly. It is hard to keep an idea or invention private forever to your own advantage… So, a great idea or a unique piece of information you figure out might provide some advantage for a while, but it is generally not sustainable or compounding.

For most, the risk-taking doesn’t pay off, and these people end up worse off than their non-risk-taking neighbors. … For a minority, however, imagine that their risk taking pays off, and they get dramatically richer than their neighbors… Unlike the first-round risk-taking losers, the winners can now afford to take more and more risks. … over time, we end up in a society where some people can afford to take rational risks with time and capital, but most cannot.

Consumer protections have their place. But there is no question that regulations, which disincentivized companies from going public quickly—and bar unaccredited investors from taking financial risks or investing in funds which do—drive inequality. In the name of protecting people we have set up a world where—quite literally—in order to have access to the best performing investments you need to already be rich.

Source: Too Many Companies Drain Value From the Economy | Bloomberg Opinion, by Noah Smith 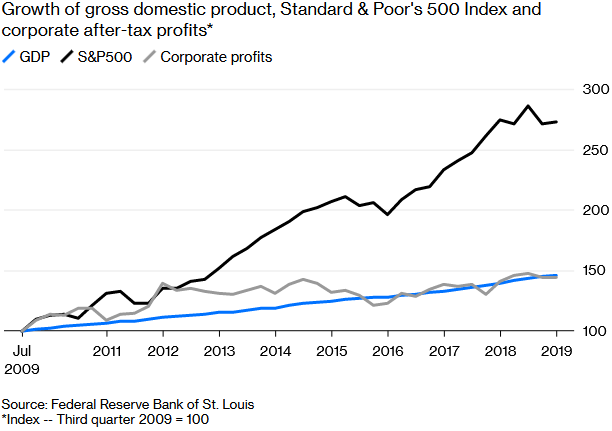 How much of this increase in market value was due to rent extraction, or to the expectation of future rent extraction?
…
it’s possible that big companies are increasing their market power by using lobbying to capture politicians and regulators. If this is true, it’s very bad news for free markets and capitalism. … Why exactly big companies and their lobbyists might have become more successful in bending regulation to their will since 2000 is still a mystery, but it’s a phenomenon that deserves more attention and investigation.

Hoffman and Yeh argue that in today’s world, it’s essential to “achieve massive scale at incredible speed” in order to seize the ground before competitors do. By their definition, blitzscaling (derived from the blitzkrieg or “lightning war” strategy of Nazi general Heinz Guderian) “prioritizes speed over efficiency,” and risks “potentially disastrous defeat in order to maximize speed and surprise.”
…
This premise has become doctrine in Silicon Valley. But is it correct? And is it good for society?
…
for every company like Paypal that pulled off that feat of hypergrowth without knowing where the money would come from, there is a dotcom graveyard of hundreds or thousands of companies that never figured it out. That’s the “risks potentially disastrous defeat” part of the strategy that Hoffman and Yeh talk about. A strong case can be made that blitzscaling isn’t really a recipe for success but rather survivorship bias masquerading as a strategy.

there are compelling reasons to blitzscale, and the book provides a great deal of wisdom for those facing a strategic inflection point where success depends on moving much faster. But I worry that the book oversells the idea

While Hoffman and Yeh’s book claims that companies like Google, Facebook, Microsoft, Apple, and Amazon are icons of the blitzscaling approach, this idea is plausible only with quite a bit of revisionist history. Each of these companies achieved profitability (or in Amazon’s case, positive cash flow) long before its IPO, and growth wasn’t driven by a blitzkrieg of spending to acquire customers below cost, but by breakthrough products and services, and by strategic business model innovations that were rooted in a future that the competition didn’t yet understand. These companies didn’t blitzscale; they scaled sustainably.

Sustainability may not actually matter, though, according to the gospel of blitzscaling. After all, the book’s marketing copy does not promise the secret of building massively profitable or enduring companies, but merely “massively valuable” ones.

What is meant by value? To too many investors and entrepreneurs, it means building companies that achieve massive financial exits, either by being sold or going public. And as long as the company can keep getting financing, either from private or public investors, the growth can go on.

Would profitless companies with huge scale be valued so highly in the absence of today’s overheated financial markets?

The horse-race investment mentality has a terrible side effect: Companies that are not contenders to win, place, or show are starved of investment. Funding dries up, and companies that could have built a sustainable niche if they’d grown organically go out of business instead. … The losses from the blitzscaling mentality are felt not just by entrepreneurs but by society more broadly. When the traditional venture-capital wisdom is to shutter companies that aren’t achieving hypergrowth, businesses that would once have made meaningful contributions to our economy are not funded, or are starved of further investment once it is clear that they no longer have a hope of becoming a home run.

I’ve talked so far mainly about the investment distortions that blitzscaling introduces. But there is another point that I wish Hoffman and Yeh had made in their book.

What is the responsibility of the winners? And what happens to those who don’t win?

The problem with the blitzscaling mentality is that a corporate DNA of perpetual, rivalrous, winner-takes-all growth is fundamentally incompatible with the responsibilities of a platform. Too often, once its hyper-growth period slows, the platform begins to compete with its suppliers and its customers. … Platforms are two-sided marketplaces that have to achieve critical mass on both the buyer and the seller side.
…
Unfortunately, the defeat being risked is not just theirs, but ours. Microsoft and Google began to cannibalize their suppliers only after 20 years of creating value for them. Uber and Lyft are being encouraged to eliminate their driver partners from the get-go. If it were just these two companies, it would be bad enough. But it isn’t. Our entire economy seems to have forgotten that workers are also consumers, and suppliers are also customers. When companies use automation to put people out of work, they can no longer afford to be consumers; when platforms extract all the value and leave none for their suppliers, they are undermining their own long-term prospects. It’s two-sided markets all the way down.

The function of the capital markets is to allocate capital. … Analysts should be constantly thinking about whether companies are over- or underpriced, so that they can buy the underpriced ones and sell the overpriced ones and keep capital flowing to its best possible uses. But when those thoughtful active analysts are replaced with passive index funds, the market stops serving that function. Whatever the biggest company is today will remain the biggest company tomorrow, and capital will never be allocated from bad uses to good ones.
…
there is an alternative view that the rise of passive investing will improve capital allocation, because bad active investors will be driven out but good ones will remain. The passive investors can’t influence relative prices, since they just buy the market portfolio, meaning that the fewer but better active investors will continue to make the capital allocation decisions.

One way to think about [passive index funds] is that they are all crude algorithms for picking the best companies to allocate capital to. True, diversified, market-cap-weighted index funds are the crudest algorithm. They essentially assume that the companies that were good yesterday will probably be good tomorrow. This is not entirely true, of course, but it’s true enough to be useful, or at least to outperform most human money managers most of the time.