Fed up—or giving up? People everywhere are down on democracy. Especially young people. 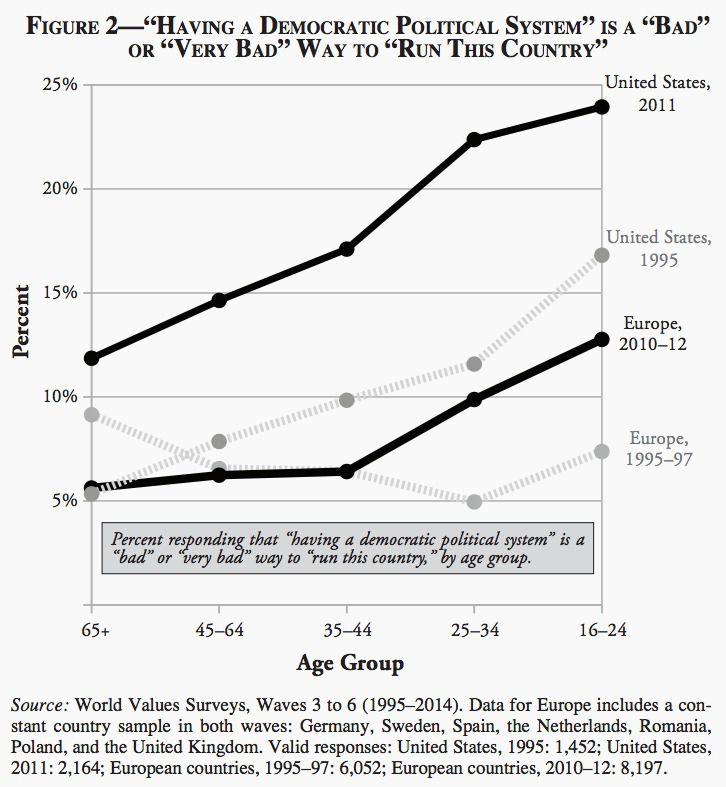 When you take the long view, civilizational collapse happens all the time. In contrast, many existential risks are speculative or rare: either they have never happened before, like nanotechnology weapons, or they are extremely uncommon, like large asteroid strikes.

You invest in the things you value, but you also need to be investing in the thing that lets you pursue your values in the first place: civilization.

Source: You Can’t Save The World Without Civilization

Democracy cannot work as it is meant to; human nature does not allow it.

Democracy for Realists, published earlier this year by the social science professors Christopher Achen and Larry Bartels, argues that the “folk theory of democracy” – the idea that citizens make coherent and intelligible policy decisions, on which governments then act – bears no relationship to how it really works

we act politically not as individual, rational beings, but as members of social groups, expressing a social identity.

This is not to suggest that it has no virtues, just that they are not the principal virtues we ascribe to it. It allows governments to be changed without bloodshed, limits terms in office, and ensures that the results of elections are widely accepted. Sometimes public attribution of blame will coincide with reality, which is why you don’t get famines in democracies.

This is not to suggest that the folk theory of democracy comes close to reality anywhere, but that the situation is not as hopeless as they propose.

Persistent, determined, well-organised groups can bring neglected issues to the fore and change political outcomes. But in doing so they cannot rely on what democracy ought to be. We must see it for what it is. That means understanding what we are.

Source: What We Are | George Monbiot

Almost all other issues are superficial by comparison to soil loss. So why don’t we talk about it?

according to the UN’s Food and Agriculture Organisation, the world, on average, has just 60 more years of growing crops. Even in Britain, which is spared the tropical downpours that so quickly strip exposed soil from the land, Farmers’ Weekly reports that we have “only 100 harvests left”.

A paper just published in the journal Anthropocene analyses the undisturbed sediments in an 11th century French lake. It shows that the intensification of farming over the last century has increased the rate of soil erosion 60-fold.

This is what topples civilisations. War and pestilence might kill large numbers of people, but in most cases the population recovers. But lose the soil and everything else goes with it.

Source: Ploughing On Regardless | George Monbiot