Source: There is no middle ground for deep disagreements about facts | Aeon, by Klemens Kappel

One particularly pernicious form of disagreement arises when we not only disagree about individuals facts but also disagree about how best to form beliefs about those facts, that is, about how to gather and assess evidence in proper ways. This is deep disagreement, and it’s the form that most societal disagreements take.

Deep disagreements are, in a sense, irresolvable. It is not that Amy is incapable of following Ben’s arguments or is generally insensitive to evidence. Rather, Amy has a set of beliefs that insulates her from the very sort of evidence that would be crucial for showing her to be mistaken. No line of argument or reasoning that Ben could sincerely present to Amy would rationally convince her.
…
We are used to the idea that respectfully accommodating the views of fellow citizens, whose intelligence and sincerity is not in doubt, requires some degree of moderation on our part. We cannot, it seems, both fully respect others, regard them as intelligent and sincere, and still be fully convinced that we are right and they are completely wrong, unless we simply agree to disagree. But on a societal level we cannot do that, since ultimately some decision must be made.

What is particularly troubling about some societal disagreements is that they concern factual matters that tend to be almost impossible to resolve since there is no agreed-upon method to do so, all while relating to important policy decisions. Generally, theorising about liberal democracy has focused largely on moral and political disagreements, while tacitly assuming that there would be no important factual disagreements to consider. It has been taken for granted that we would eventually agree about the facts, and the democratic processes would concern how we should adjudicate our differences in values and preferences. But this assumption is no longer adequate, if it ever was.

Source: The Universe Is Always Looking | The Atlantic, by Philip Ball

[Schrödinger’s] cat is still hauled out today as if to imply that we’re as puzzled as ever by the mere fact that the quantum world at small scales turns into the world of classical physics at human scales. The fact is, however, that this so-called quantum-classical transition is now largely understood. … quantum physics is not replaced by another sort of physics at large scales. It actually gives rise to classical physics.
…
At the root of the distinction, though, lies the fact that quantum objects have a wave nature—which is to say, the equation Schrödinger devised in 1924 to quantify their behavior tells us that they should be described as if they were waves, albeit waves of a peculiar, abstract sort that are indicative only of probabilities. It is this waviness that gives rise to distinctly quantum phenomena like interference, superposition, and entanglement. These behaviors become possible when there is a well-defined relationship between the quantum “waves”: in effect, when they are in step. This coordination is called “coherence.”
…
Macroscopic, classical objects don’t display quantum interference or exist in superpositions of states because their wave functions are not coherent. … Every real system in the universe sits somewhere, surrounded by other stuff and interacting with it. … Quantum superpositions of states … are highly contagious and apt to spread out rapidly. And that is what seems to destroy them. … As time passes, the initial quantum system becomes more and more entangled with its environment. In effect, we then no longer have a well-defined quantum system embedded in an environment. Rather, system and environment have merged into a single superposition. … This spreading is the very thing that destroys the manifestation of a superposition in the original quantum system. Because the superposition is now a shared property of the system and its environment, we can no longer “see” the superposition just by looking at the little part of it. What we understand to be decoherence is not actually a loss of superposition but a loss of our ability to detect it in the original system.
…
And this has nothing to do with observation in the normal sense: We don’t need a conscious mind to “look” in order to “collapse the wave function.” All we need is for the environment to disperse the quantum coherence. We obtain classical uniqueness from quantum multiplicity when decoherence has taken its toll. … All of the photons of sunlight that bounce off the moon are agents of decoherence, and are more than adequate to fix its position in space and give it a sharp outline. The universe is always looking.

Source: The space race is dominated by new contenders | The Economist 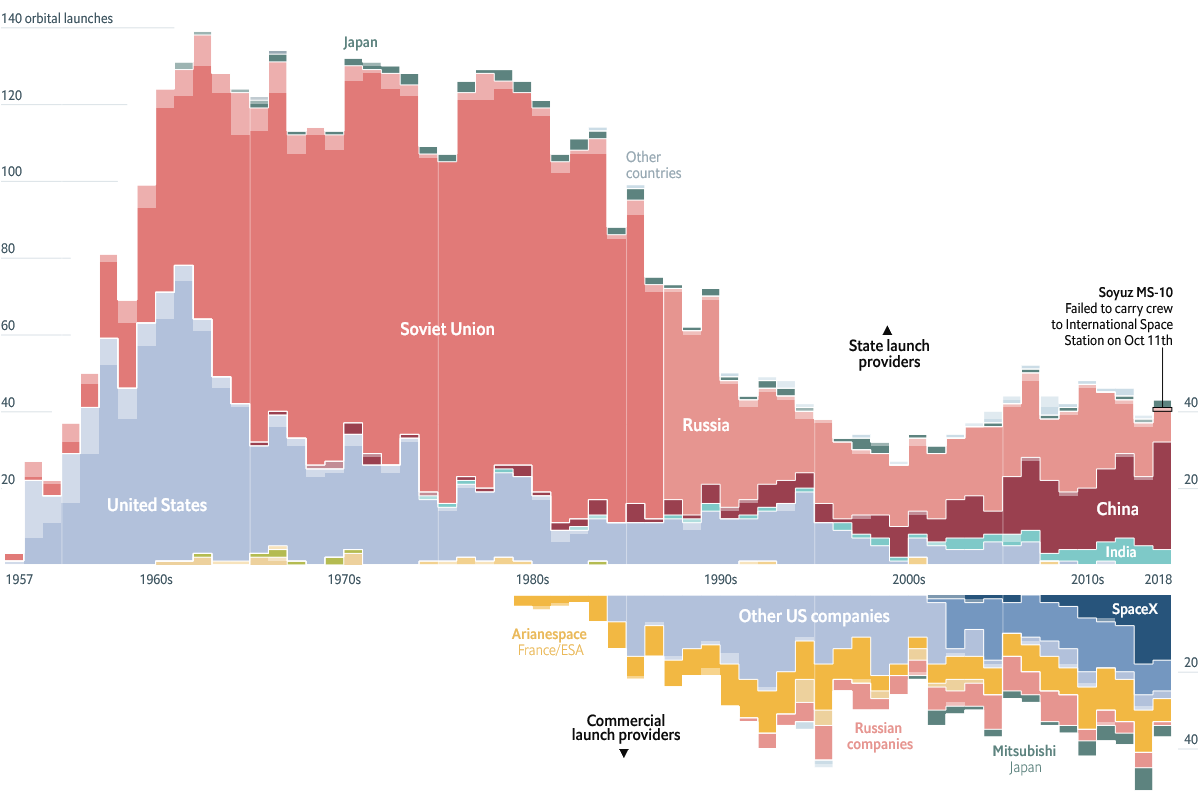 Piano Genie is in some ways reminiscent of video games such as Rock Band and Guitar Hero that are accessible to novice musicians, with the crucial difference that users can freely improvise on Piano Genie rather than re-enacting songs from a fixed repertoire.

They trained a machine learning model on ~1400 virtuosic performances from the International Piano-e-Competition in order to map 8-button input to a full 88-key piano in real time.

Source: The U.S. Needs to Crack Down on White-Collar Crime | Bloomberg Opinion, by Editorial Board

In 2015, then-Deputy Attorney General Sally Yates explained why prosecutors struggle to hold individuals accountable. “In modern corporations, where responsibility is often diffuse, it can be extremely difficult to identify the single person or group of people who possessed the knowledge or criminal intent necessary to establish proof beyond a reasonable doubt,” she said. “This is particularly true of high-level executives, who are often insulated from the day-to-day activity in which the misconduct occurs.”

All of which is true, no doubt — but justice still demands that serious crimes earn serious punishments.

That would require more resources. According to Don Fort, the chief of IRS criminal enforcement, the agency has the same number of special agents — about 2,200 — as it did 50 years ago, despite huge increases in the number of tax filers and the complexity of financial crimes.
…
A skillful white-collar defense bar has arisen to defend executives and challenge prosecutors. Corporations have grown adept at shifting liability to shareholders. And the will to crack down has subsided. After the savings-and-loan scandal of the 1980s, more than 1,000 people were charged, and more than 100 company officers and directors served prison terms. A similar response is virtually inconceivable today.

This needs to change. White-collar crime is a menace, and the impunity of its ordinary perpetrators is intolerable.