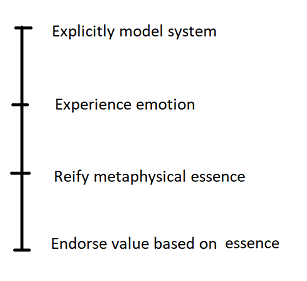 We need to navigate complicated philosophical questions in order to decide how to act, what to do, what behaviors to incentivize, what behaviors to punish, what signals to send, and even how to have a society at all. Sometimes we can use theories from science and mathematics to explicitly model how a system works and what we want from it. But even the scholars who understand these insights rarely know exactly how to objectively apply them in the real world. Yet anyone who lives with others needs to be able to do these things; not just scholars but ordinary people, children, and even chimpanzees. So sometimes we use heuristics and approximations.
…
Some examples:
…
EXPLICIT MODEL: Trying to count how many calories and milligrams of each nutrient you get
EMOTIONAL EXPERIENCE: Feeling hungry or full
REIFIED ESSENCE: Some foods are inherently healthy or unhealthy
ENDORSED VALUE: Insisting on only eating organic foods even when those foods have no quantifiable benefit over nonorganic

People can choose metaphysical heuristics or explicit models based on their own innate tendencies, their education, their intelligence, their experiences, and what kind of question we’re thinking about. Rather than talking too much about fundamental value differences, we should be asking where a given person has chosen to place themselves on the metaphysical-heuristic-to-explicit-model ladder at any particular moment.
…
Since most metaphysical heuristics are a stand-in for something real, we should expect blocs of allied people to contain some people who want the real thing, and other people who are running metaphysical heuristics that point at the thing.
…
My guess is a lot of people fluidly move back and forth between these levels, just as I would expect people who are very interested in only eating organic food to also be more likely to care about what percent RDA of vitamins are in their food. This isn’t sinister, or a reason to think that people are only claiming consequentialist arguments for their heuristics. It’s just a natural consequences of the way our values get produced and the fuzziness in everybody’s value system.

A census of the biomass on Earth is key for understanding the structure and dynamics of the biosphere. However, a global, quantitative view of how the biomass of different taxa compare with one another is still lacking. Here, we assemble the overall biomass composition of the biosphere, establishing a census of the ≈550 gigatons of carbon (Gt C) of biomass distributed among all of the kingdoms of life. We find that the kingdoms of life concentrate at different locations on the planet; plants (≈450 Gt C, the dominant kingdom) are primarily terrestrial, whereas animals (≈2 Gt C) are mainly marine, and bacteria (≈70 Gt C) and archaea (≈7 Gt C) are predominantly located in deep subsurface environments. We show that terrestrial biomass is about two orders of magnitude higher than marine biomass and estimate a total of ≈6 Gt C of marine biota, doubling the previous estimated quantity. Our analysis reveals that the global marine biomass pyramid contains more consumers than producers, thus increasing the scope of previous observations on inverse food pyramids. Finally, we highlight that the mass of humans is an order of magnitude higher than that of all wild mammals combined and report the historical impact of humanity on the global biomass of prominent taxa, including mammals, fish, and plants.

If the law exists it should be enforced and consistent, otherwise it should be removed. Currently, the United States is going further and further in a direction where laws are applied inconsistently shifting from varying enforcement regimes under different executives. Law is not law if the government can choose whether to enforce it.
…
This applies as well to how everyone is treated. From a President we may have reason to suspect of illegal activity to an immigrant fighting for asylum, all are innocent until proven guilty and treated humanely. … America will not return to its principles by partisans justifying increasingly coarse behavior and rhetoric.

One of the reasons principles matter is that each side feels locked in a death struggle. Principles are unwelcome to many because there are times we do not like those principles or where our side will lose if we abide by that principle. The principle matters more than the short term win or loss. All powers we demand can be used against us at some point. America needs to return to seeking to uphold the highest of principles knowing there will be times our side loses because we chose to uphold a principle. In a democracy, you are going to lose based upon historical precedent, probably about 50% of the time. That is the point of democracy.

It is probably true that the value of some speech is less than the cost of the harm it imposes. But … Before you empower government to police speech that is hateful or offensive, or speech that is deemed violent or harmful, then you have to consider the possibility that it will not be your sensibilities that determine which speech is beyond the pale.
…
It may be true that strong individual rights prevent institutions from protecting marginalized people from the speech of other individuals, but strong individual rights also prevent the state from attacking marginalized people for exercising their own rights. … Free speech may have its drawbacks, but the alternative is much worse.
…
We must favor individual rights over institutional power, even when individuals do bad things with their rights, because institutional power is much more dangerous when it falls into the wrong hands.

Would someone you know rather watch videos to learn more about politics?
I would like to recommend the YouTube playlists: