Source: The Internet and the Third Estate | Stratechery, by Ben Thompson

Mark Zuckerberg suggested that social media is a “Fifth Estate”; in fact, social media is a means by which the Third Estate — commoners — can seize political power.
…
in the Middle Ages the principal organizing entity for Europe was the Catholic Church. Relatedly, the Catholic Church also held a de facto monopoly on the distribution of information: most books were in Latin, copied laboriously by hand by monks. … The printing press changed all of this. … the First Estate became not the clergy of the Catholic Church but a national monarch, even as the monarch gave up power to a new kind of meritocratic nobility epitomized by Burke. In other words, Burke’s Fourth Estate was the means by which the Second Estate overthrew the first.

I would go further: just as the Catholic Church ensured its primacy by controlling information, the modern meritocracy has done the same, not so much by controlling the press but rather by incorporating it into a broader national consensus.
…
my argument [in 2016’s TV Advertising’s Surprising Strength — And Inevitable Fall] is that every part of the media-advertising-industrial complex was threatened by the Internet.

The inescapable reality is that TV advertisers are 20th century companies: built for mass markets, not niches, for brick-and-mortar retailers, not e-commerce. These companies were built on TV, and TV was built on their advertisements, and while they are propping each other up for now, the decline of one will hasten the decline of the other.

There is no reason this reality shouldn’t apply to nation-states as well.

The likelihood any particular message will “break out” is based not on who is propagating said message but on how many users are receptive to hearing it. The power has shifted from the supply side to the demand side. … And, by extension, the most successful politicians in an aggregated world are not those who serve the party but rather those who tell voters what they most want to hear.

If Facebook has the potential for immense influence on politics, why on earth would anyone want the company policing political speech?

China is building its own internet focused on very different values, and is now exporting their vision of the internet to other countries. Until recently, the internet in almost every country outside China has been defined by American platforms with strong free expression values. There’s no guarantee these values will win out. A decade ago, almost all of the major internet platforms were American. Today, six of the top ten are Chinese.

We’re beginning to see this in social media. While our services, like WhatsApp, are used by protesters and activists everywhere due to strong encryption and privacy protections, on TikTok, the Chinese app growing quickly around the world, mentions of these protests are censored, even in the US.

Is that the internet we want?

Indeed, this gets at why the Facebook questions are so critical: the company’s critics that argue that Facebook is too big are making a cogent argument that reconciles concerns about Facebook’s power with a desire to control misinformation; critics that ignore these tradeoffs, though, come across as authoritarians in their own right, disappointed in Facebook only so far as the company fails to leverage its power to enforce their personal preferences.

And so we are back to China. The U.S. specifically and the West broadly is not going to out-authoritarian an avowedly Marxist regime with a demonstrated willingness to use “re-education camps” and omnipresent surveillance to ensure the Second Estate era — that of the cohesive nation-state — remains in place. To fight the Internet’s impact, instead of seeking to understand it and guide the fundamental transformations that will surely follow, is a commitment by the West to lose the fight for the future.

I like being able to look at and access my files. But now the systems I use try to stop me from doing so. “No,” they say, “access them through these bespoke, proprietary interfaces.” I just want my file browser back, but now I’m not allowed it. It’s a relic of an earlier era.

Years ago websites were made of files; now they are made of dependencies. … The unit of creation has moved from the file to the database entry.

In some ways, that doesn’t make a huge difference. The data is the same, just stored in a database rather than an HTML document. The URL could even be the same, just behind the scenes it fetches the content from a different type of data store. But the implications are much bigger. The content is dependent on a whole heap of infrastructure, rather than being able to stand on its own.

I miss the universality of files. The fact they can work anywhere, be moved around easily. The file has been replaced with the platform, the service, the ecosystem.

An irony of studying history is that we often know exactly how a story ends, but have no idea where it began.
…
Every current event – big or small – has parents, grandparents, great grandparents, siblings, and cousins. … Those roots can snake back infinitely. But the deeper you dig, the closer you get to the Big Things: the handful of events that are so powerful they influence a range of seemingly unrelated topics.

The world is driven by tail events. A minority of things drive the majority of outcomes. … World War II, World War I, and the Great Depression influenced nearly every important event of the 20th century. Industrialization and the Civil War did the same in the 19th.

Demographics, inequality, and information access will have a huge impact on the coming decades. 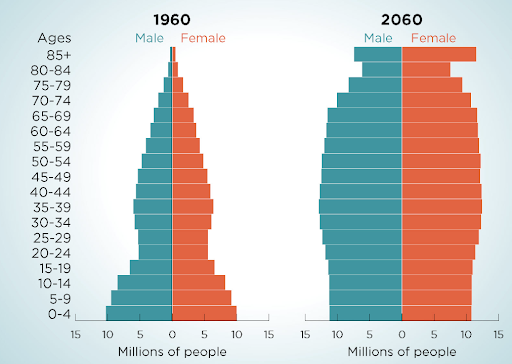 Wealth inequality that’s grown for four decades hits an inevitable breaking point. … The takeaway is that power is transitory. It shifts when those who don’t have it get so fed up that they bond together to gain enough influence to take it back. Never underestimate the power of a unified group of powerless people with a shared goal. If you accept this premise, then what’s happened over the last 40 years is a Big Thing. … I don’t know where it ends up, but the federal government of, say, 1960 was unrecognizable to that of 1920. The Great Depression and World War II triggered most of that change, but the enduring social changes of that period were centered around supporting lower-income groups after the epic Gilded Age.

Access to information closes gaps that used to create a social shield of ignorance. … The telephone eliminated the information gap between you and a distant relative, but the internet has closed the gap between you and literally every stranger in the world. … Michael Arrington recently wrote: “I thought Twitter was driving us apart, but I’m slowly starting to think half of you always hated the other half but never knew it until Twitter.” This is a good point that highlights something easy to overlook: 1) everyone belongs to a tribe, 2) those tribes sometimes fundamentally disagree with one another, 3) that’s fine if those tribes keep their distance, 4) the internet increasingly assures that they don’t.
…
In effect, credentialism is melting away. I don’t care who you are or what your job title is. If you have a good idea, I want to hear it. Of course the flip side of this is dangerous, as the maniac shouting the loudest often gets the attention.
…
A third shift is that it is now harder to hide behind, yet easier to spread, false and misleading information. I don’t know how to reconcile that contradiction, but you see both everywhere.

Source: A Separate Kind of Intelligence | Edge, by Alison Gopnik

“Instead of trying to produce a program to simulate the adult mind, why not rather try to produce one which simulates the child?”

One of the consequences of that, which is not so obvious, is thinking about children not just as immature forms who learn and grow into an adult intelligence, but as a separate kind of intelligence

Life history is the developmental trajectory of a species: how long a childhood it has, how long it lives, how much parental investment there is, how many young it produces. … The strategy of producing just a few younger organisms, giving them a long period where they’re incapable of taking care of themselves, and then having a lot of resources dedicated to keeping them alive turns out to be a strategy that over and over again is associated with higher levels of intelligence. … It turns out to even be true for plants and for immune systems.

Creatures that have more complex immune systems also have this longer developmental trajectory. It looks as if there’s a general relationship between the very fact of childhood and the fact of intelligence. That might be informative if one of the things that we’re trying to do is create artificial intelligences or understand artificial intelligences. In neuroscience, you see this pattern of development where you start out with this very plastic system with lots of local connection, and then you have a tipping point where that turns into a system that has fewer connections but much stronger, more long-distance connections. It isn’t just a continuous process of development.

An interesting consequence of this picture of what intelligence is like is that many things that seem to be bugs in childhood turn out to be features. Literally and metaphorically, one of the things about children is that they’re noisy. They produce a lot of random variability. … That randomness, variability, and noise—things that we often think of as bugs—could be features from the perspective of this exploratory space. Things like executive function or frontal control, which we typically think of as being a feature of adult intelligence—our ability to do things like inhibit, do long-term planning, keep our impulses down, have attentional focus—are features from the exploit perspective, but they could be bugs from the perspective of just trying to get as much information as you possibly can about the world around you.

Being impulsive and acting on the world a lot are good ways of getting more data. They’re not very good ways of planning effectively on the world around you. This gives you a different picture about the kinds of things you should be looking for in intelligence.

Source: My Family Story of Love, the Mob, and Government Surveillance | The Atlantic, by Jack Goldsmith
adapted from Jack Goldsmith’s new book, In Hoffa’s Shadow: A Stepfather, a Disappearance in Detroit, and My Search for the Truth

the government’s surveillance power has grown unfathomably since the 1960s. The “frightening paraphernalia” from six decades ago are toys compared with the redoubtable tools that allow the government to watch and record our movements and communications, and that enable it to store almost limitless amounts of data on its own or to piggyback on the masses of data that we volunteer to private firms. … Congress has ratified and legitimated what were once legally tenuous surveillance techniques. It did so after the executive branch convinced legislators that the techniques were necessary for law enforcement and national security, but it imposed various legal constraints on their use.
…
The result of these developments is yet another “new normal” in which the government is constrained in certain respects but citizens are far more exposed to lawful government surveillance than before. This latest new normal, like earlier ones, will not prove stable. … If history is a guide, the government will perceive a security advantage in using these and other tools in new ways to watch us and to predict and preempt our behavior. … Congress will legalize the surveillance practice on the condition, mainly, of new procedural restraints. And we will adjust to our more naked selves.

This is a depressing conclusion for many, but it is an inevitable one. The executive branch does what it thinks it must, including conduct robust surveillance, to meet our demands for safety.