Source: Is there a tension between creativity and accuracy? | Michael Nielsen

I believe there is a tension between behaviours which maximize accuracy and those which maximize creativity… A lot of important truths come from very irrational people.

To be creative, you need to recognize those barely formed thoughts, thoughts which are usually wrong and poorly formed in many ways, but which have some kernel of originality and importance and truth.

Share Lab uses flow charts and data analysis to map one of the greatest forces shaping our world – Facebook.

Individually, these are powerful tools; combined they amount to a data collection engine that, Mr Joler argues, is ripe for exploitation.
…
The data will remain in the hands of one company. Even if its current leaders are responsible and trustworthy, what about those in charge in 20 years?

“What is most striking is the sense of resignation, the impotence of regulation, the lack of options, the public apathy,” says Dr Powles. “What an extraordinary situation for an entity that has power over information – there is no greater power really.”

The following map is one of the final results of our investigation
…
Within those invisible walls, in every moment algorithms are deciding which information will appear in our infosphere, how many and which of your friends will see your posts, what kind of content will become part of your reality and what will be censored or deleted.

Source: Why do so few people major in computer science? | Dan Wang 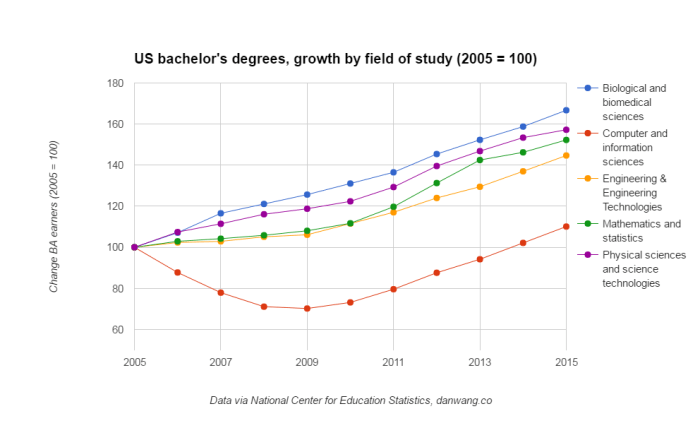 In 2005, about 54,000 people in the US earned bachelor’s degrees in computer science. That figure was lower every year afterwards until 2014, when 55,000 people majored in CS.
…
This is even more surprising when we consider that 1.90 million people graduated with bachelor’s degrees in 2015, which is 31% higher than the 1.44 million graduates in 2005. (Data is via the National Center for Education Statistics, Digest of Education Statistics) That means that the share of people majoring in computer science has decreased, from 3.76% of the all majors in 2005 to 3.14% of all majors in 2015.

Source: How Far Should Societies Go to Prevent Terror Attacks? – The Atlantic, by Conor Friedersdorf

Almost everyone is unwilling to do certain things to eliminate terrorism. And that is fortunate, for the endurance of a free society depends upon it.

The problem with [absolutist] arguments is the implication that disagreements about what policies to pursue are rooted in some people caring enough to stop children from dying horribly, and others not so much. In fact, there are deep disagreements about the likely effects of many policies. And while the willingness to adopt some policies even though dead children will result is real, it is also universal; if you favor allowing cars to drive faster than 25 miles per hour, or allowing kids to ride in them, then you are willing to say that a certain amount of deaths are the price we pay to live as we want.
…
To put it so bluntly is politically incorrect. But to hold the contrary position, that we will pay any price to end terrorism, is morally monstrous and incompatible with the Constitution.

No free society could survive the latter posture.

For many Americans, myself included, the Iraq War was not a counterterrorism success. It was a conflict that killed many more Americans than died on September 11, 2001; and the instability that it spawned was a major root cause of the rise of ISIS. The bipartisan consensus against more ground invasions in the Middle East is not rooted in an unwillingness to make the necessary sacrifices to reduce terrorism; it reflects a belief that the Iraq War seems to have increased rather than reduced global terrorism.

Is it even the case that the occupation of Afghanistan made Americans safer? … One also wonders how many people were radicalized into terrorism as a result of U.S. abuses in Iraq, like the ones at the Abu Ghraib prison, or by innocents killed by drones.

To be moved by an argument of the sort that [David French] offers is to be manipulated into eliding questions of efficacy and values by the specter of dead children. Don’t be led astray.

Source: How Far Should Societies Go to Prevent Terror Attacks? – The Atlantic, by Conor Friedersdorf

A Republic demands courage — not foolhardy and unsustainable “principle at all costs,” but reasoned courage — from its citizens. The American response should be to find some other solution to this problem if the casualty rate is unacceptable. To demand that the government “keep us safe” by doing things out of our sight that we have refused to do in much more serious situations so that we can avoid such a risk is weak and pathetic. It is the demand of spoiled children, or the cosseted residents of the imperial city.

“What exactly is the definition of ‘human’ in a society where a mind can be copied and the body replaced with a synthetic form?”, “What exactly is the ‘ghost’—the human soul—in the cybernetic body, or ‘shell’?”, and “Where is the boundary between human and machine when the differences between the two become more philosophical than physical?”

A Stand Alone Complex can be compared to emergent copycat behavior … An incident catches the public’s attention and certain types of people “get on the bandwagon”, so to speak. … What separates the Stand Alone Complex from normal copycat behavior is that there is no real originator of the copied action, but merely a rumor or an illusion that supposedly performed the copied action … the facade just has to exist in the minds of the public. In other words, a potential copycat just has to believe the copied behavior happened from an originator – when it really did not.
…
due to the electronic communications network that is increasingly permeating society, more and more people are being exposed to the same information and stimuli, making the overall psyche and responses of large groups of people increasingly similar; the result is an exponential increase in the potential for copycat behavior that forms a Stand Alone Complex.

Source: Ghost in the Shell Philosophy