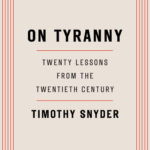 In politics, being deceived is no excuse.

know the truth, and the truth will set you free

Most of the power of authoritarianism is freely given. … A citizen who adapts in this way is teaching power what it can do.

A minority party that exercises almost all state power “proposes few policies that are popular with society at large, and several that are generally unpopular–and thus must either fear democracy or weaken it”.

Professional ethics must guide us precisely when we are told that the situation is exceptional. Then there is no such thing as “just following orders.”

know that evils of the past involved policemen and soldiers finding themselves, one day, doing irregular things. … without the conformists, the great atrocities would have been impossible.

Fascists despised the small truths of daily existence, loved slogans that resonated like a new religion, and preferred creative myths to history or journalism. They used new media, which at the time was radio, to create a drumbeat of propaganda that aroused feelings before people had time to ascertain facts. And now, as then, many people confused faith in a hugely flawed leader with the truth about the world we all share.
Post-truth is pre-fascism.

Take responsibility for what you communicate with others. … It is your ability to discern facts that makes you an individual, and our collective trust in common knowledge that makes us a society.

The choice to be in public depends on the ability to maintain a private sphere of life. We are free only when it is we ourselves who draw the line between when we are seen and when we are not seen. … No one (except perhaps a tyrant) has a private life that can survive public exposure by hostile directive.

It is the government’s job to increase both freedom and security.

Modern tyranny is terror management. When the terrorist attack comes, remember that authoritarians exploit such events in order to consolidate power. The sudden disaster that requires the end of checks and balances, the dissolution of opposition parties, the suspension of freedom of expression, the right to a fair trial, and so on, is the oldest trick in the Hitlerian book. Do not fall for it.

A patriot has universal values, standards by which he judges his nation, always wishing it well — and wishing that it would do better.

If you once believed that everything always turns out well in the end, you can be persuaded that nothing turns out well in the end. If you once did nothing because you thought progress is inevitable, then you can continue to do nothing because you think time moves in repeating cycles. … History permits us to be responsible: not for everything, but for something.