As America’s economic supremacy fades, the primacy of the dollar looks unsustainable 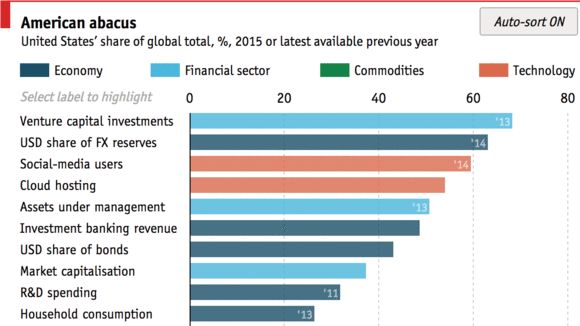 Ih hegemons are good for anything, it is for conferring stability on the systems they dominate. … The widening gap between America’s economic and financial power creates problems for other countries, in the dollar zone and beyond. That is because the costs of dollar dominance are starting to outweigh the benefits.

In 2008-09 the Fed reluctantly came to the rescue, acting as a lender of last resort by offering $1 trillion of dollar liquidity to foreign banks and central banks. The sums involved in a future crisis would be far higher. The offshore dollar world is almost twice as large as it was in 2007. By the 2020s it could be as big as America’s banking industry.

If foreigners continue to accumulate reserves, they will dominate the Treasury market by the 2030s. To satisfy growing foreign demand for safe dollar-denominated assets, America’s government could issue more Treasuries—adding to its debts. Or it could leave foreigners to buy up other securities—but that might lead to asset bubbles, just as in the mortgage boom of the 2000s.

There are things America can do to shoulder more responsibility—for instance, by setting up bigger emergency-swaplines with more central banks. More likely is a splintering of the system, as other countries choose to insulate themselves from Fed decisions by embracing capital controls. The dollar has no peers. But the system that it anchors is cracking.

Source: The world economy: Dominant and dangerous | The Economist