I want to talk about crying, or to be more precise, weeping or emotional tears. Humans … are the only ones who unite tears and noisy crying together in a single behavior.

the question to ask about crying isn’t, “What causes it (as a symptom)?” but rather, “What is a human creature trying to achieve by doing it (as a behavior)?”

The goal of our investigation is to explain three things: First, what weeping accomplishes. Second, how we evolved to do it. And third, why only humans weep.

In particular, they’re a social behavior, something we evolved to do because of their effects on the people around us. In the language of biology, then: Tears are a signal.

we, as receivers, often feel manipulated by someone else’s tears is the giveaway that crying is a signal — i.e., because it aims to change our behavior. … a submission signal … a distress signal

I’d like to throw my hat into the ring, by providing my own hypothesis for how and why tears evolved.
…

it’s a way of giving up dominance in the hope of earning allies. 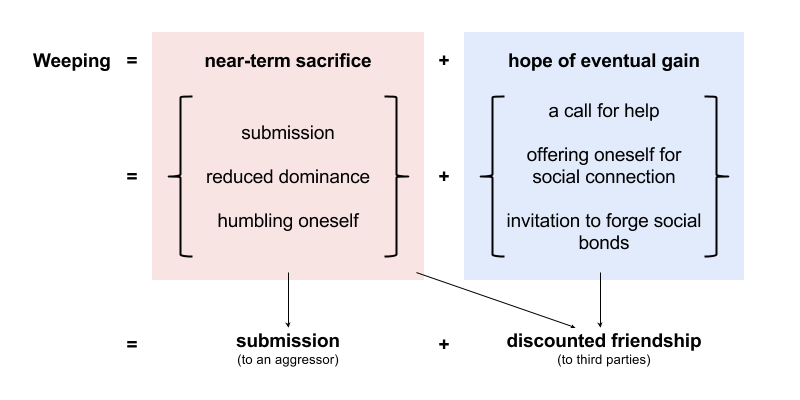 inherently they’re just a piece of social technology, a device for coordinating the tradeoff between dominance and social support. And this invention turns out to be useful in a variety of scenarios.

More: Why Only Humans Weep by Ad Vingerhoets